Food color dyes make some foods look more appealing. However, when you walk through the supermarket it is easy to pick out which foods are manufactured for children.

They are usually fun shapes, and fun colors to attract the attention of children. 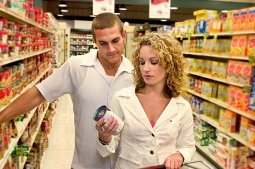 Since these foods are targeted for our children, one would hope they would be healthy choices that please both the parent and the child.

Even though there are many natural coloring agents, or natural food dyes, most companies use artificial food coloring dyes to save money.

For example, in America Coca-Cola’s Fanta is colored with Red 40 and Yellow 6.

In the U.K. Fanta is colored with pumpkin and carrot extract.

Likewise, McDonald’s strawberry sundaes are colored with Red 40 in the U.S., whereas in the U.K. real strawberries are used (Common Dreams).

While saving money is fine, there are some significant health effects as a result of the chemistry of food dyes and artificial coloring, especially for the target consumers, our children who will use that food the most.

The artificial food color dyes in food has been shown to have a significant effect on hyperactivity in children, and isn’t restricted to affecting those with ADHD.

In a study that involved 153 three year old children, and 144 eight to nine year olds, researchers found that children given the drink containing sodium benzoate and one of two artificial food color dyes and additives, had a significant effect on the children’s global hyperactivity aggregate (Nordqvist).

This becomes especially problematic in the school performance of children as it bleeds onto children’s abilities to excel in many areas of academic performance.

Schools that have experimented with removing all junk food have seen landmark improvement.

Fight Back With Your Grocery Dollars

While children may beg and plead for the superbly marketed additive-filled children’s foods, for their own sake it’s best to avoid them.

And if you use food coloring in your baked goods or frosting, try to use natural food coloring. If your supermarket doesn't carry them, check out India Tree Natural Decorating Colors, 3 bottles(red,yellow,blue)

This way they are getting the visual stimulation of the artificially colored foods without the adverse effects.

With the constantly rising rates of ADHD, we may need to look closer at what is causing this behavior.

If this challenge to our children’s learning can be avoided naturally, by making healthy food choices instead of treatment with harmful drugs, maybe offering alternatives to the favorite cartoon fruit snack is worth it.