What are Genetically
Modified
Food Products?

As the name implies, genetically modified food products refers to plants and animals that are not only raised for food consumption purposes; they have undergone genetic engineering for enhancement purposes.

One way this works involves selectively breeding plants and animals in order to produce a desired genetic effect.

For example, selective breeding could be employed to alter or enhance the nutritional aspect of a food source. 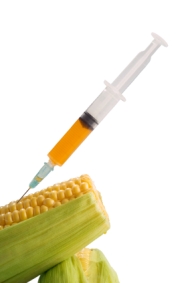 However, experiments on livestock have been occurring for years. Perhaps a greater expansion of genetically modified animal food may occur sometime in the near future.

There are currently no acceptable standards for modified food testing. Numerous studies of this subject show that genetic engineering of our food supply affects people, animals and the the environment.

The full scope of health problems hasn't yet been realized, but the concerns are many and range from allergies to cancer. The Center For Food Safety has a lot of information on the concerns and risk of genetically modified food products.

We Have A Right To Know, Label It!

One would think that if GM food was such a wonderful advancement, there would be testing and standards of full disclosure and safety.

Unfortunately, much of what goes on in the laboratories where food is genetically modified occurs in secrecy.

As such, the public is unaware of how the food has been modified.

There is no regulatory control over the development of these foods.

Consequently, the effects and dangers of modified food are not completely known.

While the food companies would like to profess otherwise, the public would probably be less likely to purchase genetically modified food products.

That is why most food companies will not label their food to alert consumers of such modifications.

The Campaigns & What You Can Do

Thankfully, there are a number of grass roots campaigns like the Center For Food Safety (new webpage will open) to raise public awareness on this subject because many people are totally unaware that they may be consuming a GMO product.

The purpose of raising such awareness may ultimately yield a positive effect and hopefully stop the process of genetically modifying food.

Many activists are lobbying for food to come with labels that detail whether or not food has been genetically modified.

Unfortunately, there are many large corporations in the food industry that are pouring massive amounts of money into campaigns to fight against labeling.

Hopefully, as more people become aware of the lack of testing, the ethical dilemmas and health problems from GMO foods, they will quietly disappear from the consumer landscape.

That would be the best case scenario, but that is highly unlikely. In the meantime, growing your own produce and buying organic are the best options we have.