High fructose corn syrup, also known as HFCS, is widely used as a preservative and a sweetener in processed foods instead of sugar.

Through a complicated and highly refined process, glucose is extracted from cornstarch and then converted into fructose.

This mixture is actually a high percentage of fructose combined with glucose that can withstand a long shelf life.

This costs food manufacturers much less than sugar does.

Both of these elements make it the preferred choice for producers of soft drinks, condiments and a wide variety of processed foods.

Don't be misled by the television commercials telling you high fructose corn syrup is the same as sugar.  It's not.

Having similar calorie counts isn't the problem. It's harmful to your health in many ways.

Is Fructose A Healthy Alternative to Sugar?

Many assume fructose, because it's found in fruit and honey, is a healthier alternative to sugar.  Few realize that high fructose corn syrup is not the same as pure fructose.

When fructose is combined with high concentrations of glucose, the mixture metabolizes in the blood stream the same way that sugar does.

Also, in testing on rats, high amounts of fructose caused severe liver damage similar to the damage noted in the livers of alcoholics.

Fructose, when consumed by eating a fresh piece fruit, is a healthy alternative because it's a natural, whole food complete with nutrients and fiber.

Awareness about genetically modified foods is also on the rise, giving health conscious individuals another reason to avoid this additive.

This is to increase their stability as they withstand the high temperatures needed to process them.

Almost all prepared foods contain corn syrup or some other type of corn derivative.  Unless it's organic, gmo corn was most likely used.

To learn more about the dangers of genetically engineered foods and GMO foods, see the link in the "Additional Resources" below.

How It Affects Your Health

HFCS is believed to be a main contributing factor to life-threatening illnesses such as diabetes and obesity. Some believe that HFCS is an acceptable sweetener for diabetics because it restricts the production of insulin and Leptin.

HFCS should not be consumed by diabetics, especially when listed at the top of the ingredient list.  Stevia is considered a better alternative.

As children are more likely to consume higher amounts of high fructose corn syrup in snacks and other processed foods, of particular concern is the growing problem of autism, diabetes and obesity in these younger populations.

How Does HFCS Lead to Obesity?

There are scientific studies proving that HFCS leads to obesity. The hormone Ghrelin is secreted when your stomach is empty telling your brain that you want food.

After consuming a sufficient amount of food, your fat cells secrete a hormone called Leptin.

Leptin is important because it tells your brain, you're full and you stop eating.

Without producing Leptin, your body never gets the message that you're full and you never feel satiated.

It's easy to over eat when the ghrelin production keeps sending signals to the brain telling you that you're still hungry.

As a side note, if you don't get enough sleep your body secretes more ghrelin and less leptin is released.

Mercury has recently been discovered in high fructose corn syrup from companies that manufacture the sweetener, typically the older facilities.

Mercury is a highly toxic substance that accumulates in the body and is known for causing brain damage and a host of cognitive impairments.

No level of mercury exposure is considered safe, yet many consumers are unaware of how often they risk contamination by consuming processed foods made with high fructose corn syrup.

Not Surprisingly, The CRA Promotes HFCS As Safe

You may have noticed the recent multi-media campaign about high fructose corn syrup.

There is a bombardment of television commercials, advertisements and articles assuring the public that HFCS is not a health risk. It's important to note that these advertisements are sponsored by the Corn Refiners Association (CRA).

Obviously, they are concerned about the rising consumer awareness of the dangers of HFCS and the negative impact it could have on their profits.

Fortunately, consumers have spoken with their buying dollars and some manufacturers are listening.  You can find many items that now have labels indicating "no high fructose corn syrup".

Reading the ingredients on food labels is very important. The Food and Drug Administration has been rather indecisive in its position on whether or the not products containing high fructose corn syrup can be labeled as ‘natural’.

Some companies were trying to disguise it by listing "corn sugar" in the ingredients.

Check your labels, you'll find it in many unsuspecting foods like:

Keeping Your Family Happy Without HFCS

You're bound to get some moans and groans from your family when you decide not to purchase their favorite packaged treat. As a parent, you know it's your responsibility to provide good food choices to ensure their good health. 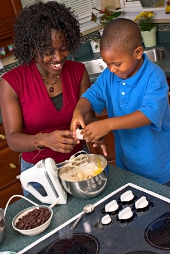 Yes, it is going take more effort, but try to make more foods from scratch. Frozen veggies that are pre-chopped can help save you some time.

Make "cooking and baking" a family activity.  Most children will always answer "yes" if you ask them if they would like to help you cook something.

You can start with making cookies or their favorite snack foods and then progress to making healthier dishes.

This time in the kitchen gives you an opportunity to talk about the value of eating good food and how it relates to better health.

So many people don't cook anymore, if you're kids are old enough, take turns and have them make dinner one night. Prepare to be amazed, they can be pretty creative!

Some of My Favorite Cooking Resources:

There are some great cookbooks that focus on cooking quick meals and cooking efficiently and economically.

. This cookbook cuts down on my preparation and cooking time. I can make a roast beef dinner for Sunday and then have 4-5 more meals from the leftovers. She provides all the recipes for making this simple and easy. My family loved the meals and I think yours will too. If you've only got a half an hour for dinner prep, then Rachel Ray 30 Minute Meals

is a really good cookbook to have. She provides a nice variety of different kinds of meals. They are quick to make and very delicious.

The Dangers of Genetically Modified Foods

Aspartame and Other Harmful Artificial Sweeteners